This has bugged me for QUITE some time now, but someone got around to saying it before I did.

It's just great.
Posted by Rhology at 8:03 AM 3 comments: Links to this post

What are you gonna do?

So a bunch of postmodernist women decide that it would be really nice to be priests in the Roman Catholic Church. Why? Only God could tell you.
But you gotta give 'em points for originality. They get on a boat in between Canada and the US, technically not in any particular bishop's jurisdiction, and get "ordained" by 3 female "bishops" as priests. Why on the river? To escape the "unjust" canon law that refuses ordination to women, of course!

"But, won't they be excommunicated like all the others who have gone before them?" you ask? Well, sure. But do they worry about that?

--"Married with children and grandchildren, she (one of the "priests") said she did 'not fear an excommunication because I don't feel excommunicated'."

Oh man. I shouldn't laugh, but it's still pretty funny. I wonder how long it'll take before they are excommunicated. If the Vatican is smart, they'll start proceedings right away.

Posted by Rhology at 1:42 AM No comments: Links to this post

Given that I am surprised to be alive and not already in eternal punishment, should I be surprised that many other human beings somehow manage to escape that same realisation?

On the one hand, it's so clear from the revelation of the One True God that that is so (if you're not so sure, when was the last time you read Romans 2 and 3?).
Yet on the other hand, human beings have such an obvious propensity to turn away from God's revelation and follow their own path, it would do an injustice to the depravity of humans to doubt our capacity for self-delusion.
But it remains shocking, even w/ that in mind, to hear someone, even someone who claims to be Christian, opine that some people do not deserve eternal agony in hell, but rather that some are good enough not to stand condemned.
Posted by Rhology at 3:50 AM No comments: Links to this post

Spurred on by an insightful sermon on Sunday night, I am musing on the wrath of God.
Truly His wrath is an integral part of Who He is - an attribute as much as love or jealousy or mercy.
I want to work on being surprised every day. Let's start w/ step one for now, and so we will forego a concentration on being "surprised by joy," or surprised by God's love, or whatever. We are enemies of God until we are justified by His grace. After the Holy Spirit indwells us, we yet still dare to blaspheme His name and reputation by following our carnal desires and lusts. For shame!
Do we not, every one of us, merit stamping out as God will indeed stamp out His enemies at the judgment? Do we not deserve to be found among those cowering in the face of our upcoming destruction (Revelation 6:15-17)?

I want to wake up every day in a state of amazement and even shock that I am not destroyed, cast away from a righteous God Who would do well in judging me for the sin I have committed. Indeed, I have offended Him Who is of infinite goodness and have therefore incurred an infinite penalty. I am surprised to be alive today.
Posted by Rhology at 11:52 AM No comments: Links to this post

If it wouldn't hurt nobody...

It is commonplace to hear criticisms of President Bush and his policies on Iraq - "No blood for oil!" and other such garbage.

I ask this on behalf of myself and of all friends, well-wishers, compatriots, and even those who really dislike me (many of whom drive much less fuel-efficient vehicles than I do):

President Bush, if you're going to be criticised all the time for going to Iraq for oil no matter what you do or do not do, couldn't you at least use some Iraqi oil to drive down the gasoline prices in the USA?
The President has gone out of his way (way too far out of his way, in my opinion) to try to appease his critics, many of whom seem to have an irrational hatred for him bordering on obsession. Many justify their venomous attacks on him (in between rants about Karl Rove being The Source of All Evil in the Universe) by saying that he is exploiting the poor Iraqis and he just wants petroleum for his oilman friends in Texas.

So what's wrong w/ giving in a little bit, since the damage is already done (I mean, heck, Mr. President, my guess is that your approval rating is dropping largely b/c you haven't done enough to destroy the terrorists yet and people are getting impatient)?
While you're taking care of that, how about letting my car drink in a little Kirkuk petrol, preferably in a cobalt glass w/ a little umbrella? It's there, it's sitting, it wouldn't do you any harm to get us some. Why don'tcha throw your loyal constituents a bone and work something out so we don't blow through our savings this summer? Just how much of a "regular guy" are you and how much politician?
Posted by Rhology at 8:40 AM No comments: Links to this post

So the London bomber suspects have been identified.
And what a SHOCK. They are --gasp!-- YES!

You know, it's too easy to bring up the tired example of the 80 year-old grandmother from Des Moines getting questioned in the back room of the airport for two hours while two Arab males wearing machetes get onto a plane w/ no questions asked. And I wouldn't bring it up except it's barely an exaggeration.

OK, the machetes are.

But the rest is not. This product of liberal politics and thinking is going to get somebody else killed. But the libs will just blame it on the President.
Posted by Rhology at 9:43 AM No comments: Links to this post

You know, the viewers of Neil Cavuto's "Your World" on FoxNews are often really funny in their "Viewer Emails."
An approximate example -

You know, when one viewer wrote in and asked whether your haircut cost $500, you must have laughed to yourself, knowing that your haircut, your hairpiece, and your dentures didn't total half that much."

That's some funny stuff. Made me laugh at 5 am, which is not easy to do, lemme tell ya.
Posted by Rhology at 4:58 AM No comments: Links to this post

"God opposes the proud, but gives grace to the humble" (James 4:6).

The sermon during a visit to a church in W Kansas while visiting family mentioned this verse and the pastor gave a few thoughts on the identity of these proud ones mentioned.
And it occurred to me that many of the proud of this world achieve even the very height of arrogance in that they twist the meaning of God's revelation into what they desire it to mean. It is exactly this sin that was at the center of the Fall when Satan slyly asked, "Has God truly said?"
Over the course of the last few years, I have encountered quite a few denizens of this category. America is such a melting pot that there are a wide variety of people and abuses of Scripture's meaning to be found.
Included in those abuses are assertions that the Scripture is full of contradictions, that homosexuality is really not so bad since it's only mentioned in a few places and never by Jesus, that certain parts of Scripture are more important than others (such as Jesus' words being more important than others', like Paul's), that the Scripture has assured perfect physical health for us if we will but claim it w/ enough faith, and that God is actually a really bad communicator so that the Scripture is by no means clear.

Thus, to the servant of God who listens to God's voice (John 10:14-16), it is comforting to rest in the words of the Redeemer, Who is faithful and true. For he who is willing to submit to the words of the Master (James 4:7), there will be grace rather than divine opposition. He who falls into the trap of this pride is conjoined to the enemy of his own soul, one way or another. For them, I pray for mercy, since there is opposition where they could have grace.
Posted by Rhology at 1:59 AM 1 comment: Links to this post 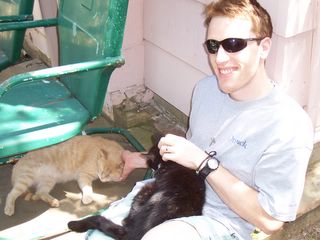 Trying again.
This is a picture.
Posted by Rhology at 6:06 AM 2 comments: Links to this post

Enough seriousness. This is me engaged in one of my fave-o-rite pasttimes just outside a bed-and-breakfast in Muskogee.
This is a picture.
Posted by Rhology at 4:45 AM No comments: Links to this post

Negotiations with the inhuman

Was chatting w/ a new friend from Ukraine tonight about politics. I sometimes shy away from these conversations, but generally do not unless I see the person getting really upset or see a possibility of getting into a spiritual conversation, which is an infinitely better use of everyone's time.
That said, I must iterate that I enjoy a good jaunt about the Iraq war when I'm feeling saucy. Which I was, since today I was able to break a string of nights of insufficient sleep.
At any rate, I'll leave most of the details to one side, but the thing that stuck out to me was his continuing insistence upon negotiation. Negotiate this and negotiate that. It remains unbelievable to me that he really believed that the conflict over Iraq and its refusal to allow inspectors and its support of terrorism could be resolved by negotiation. Which had been going on for 9 years! He obviously has much less faith in the abilities of sniveling politicians to give away 95% of their own original position to achieve a fraction of what they want from killers (cf. Barak's final offer to Arafat under Clinton's Camp David talks) than I do.

I wonder if he thinks we should talk nice to the London bombers too. No doubt they just hate the English b/c they're helping in Iraq. Maybe we should pull out.
I wonder from where the US should have pulled its soldiers to prevent Sept 11?
Posted by Rhology at 3:17 AM 3 comments: Links to this post

My prayers are w/ the people of London.

May they know the mercies of the Lord Jesus Christ, know that the Father is distanced from each of them but by their own pride, and know that their lives, too, are a vapor.

May the general public come to realise the dark scourge that is radical Islam.
Posted by Rhology at 2:37 AM 2 comments: Links to this post

I live in a medium-large Midwestern city, and today a billboard caught my eye on the Interstate.
Before, it had read, "Love God, but hate church? So did we. Lifechurch.tv"
Point of interest - the name of church itself is Lifechurch.tv. Not just its website.

...Sits back to let readers' jaws slacken...
Posted by Rhology at 8:06 AM 4 comments: Links to this post