A courteous advocate of gun control 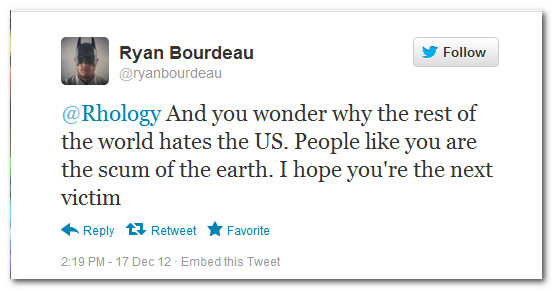 Text of the tweet:
And you wonder why the rest of the world hates the US. People like you are the scum of the earth. I hope you're the next victim


(Please leave any comments at Triablogue.)
Posted by Rhology at 8:43 AM Links to this post

A student at the local university wrote in to the Abolish Human Abortion page, requesting an interview with one of the agitators-in-residence.
I volunteered, as a I certainly qualify as an agitator.
The questions and their answers allowed me to delve into some of the reasons I blog the way I do and live the way I do. Perhaps they will interest you too.

Would you consider yourself to be pro-life or pro-choice?
I am an abolitionist of human abortion, so entirely pro-life.

What factors do you attribute to presenting a strong argument for your point of view?
Reasoned analysis and logical coherency. Also, since the question of abortion is fundamentally a moral question, the issue of authority must be dealt with fundamentally, lest one commit the naturalistic fallacy.

Which of these would you say is the most important?
Probably the question of authority. It's most important because it's so little understood.

Communication competence is defined as the balance of appropriateness and effectiveness. For example, one would want to be more appropriate than effective when explaining a complex problem in a formal setting. Whereas, one would want to be more effective than appropriate when attempting to persuade an opposing party to agree with your perspective. When debating a controversial issue, like abortion, describe how you manage these two variables in order to make a strong argument.
There is one answer for face-to-face scenarios and another for Internet-based interactions.
Face-to-face: I make an effort to judge the initial parameters of the encounter, the context, the way the person approached me or the trigger that brought me to approaching them. For example, discussing this question at work during “work time” as an aside is different from discussing it at work during break is different from “on the street” encounters is different from family. And of course, as the situation develops and body language, tone of voice, volume of voice, level of interruption, etc, proceed, I must adapt. Most times, since most people are incapable of maintaining calm during these types of debates, I must move toward less effectiveness and more appropriateness, in an effort to continue the interaction and lessen the risk of the interlocutor(s) simply losing their temper or disengaging altogether.
In some cases I have moved toward more effectiveness/stridency in these encounters. That sort of thing is definitely the minority of occurrences and usually happens because I have detected a particularly pernicious hypocrisy or, in at least one case, where a promising discussion was developing with Person X but then Person Y intervened out of nowhere and seemingly turned Person X's demeanor totally against me, such that X became unwilling to consider my position seriously.
Internet-based interactions are usually very different because one does not have the benefit of access to body language, tone of voice, etc. Further, people that one meets on the street, for example, are not necessarily particularly interested in discussing the issue or do not necessarily have a great deal of confidence in their abilities to discuss it. If someone seeks out my blog or the Abolish Human Abortion page, however, and of their own free will open a dialogue by posting a comment, it is a safe assumption that they are willing to discuss the issue. This doesn't guarantee they are OK with a reply once it is given or that they do indeed have any knowledge, as sometimes people merely reply with an emotional drive-by comment, but the chances are greater.
Another relevant consideration: what is said on the Internet is in most cases semi-permanent, whereas words spoken face-to-face are transient.
A final consideration: Someone like an AHA admin or a Christian “godblogger” (of which I am both) has seen the same challenges repeated dozens of times and maintaining patience is challenging with the same things over and over, so that contributes to a more strident tone of writing, more clipped replies, less benefit of the doubt given to the challenger.
Read more »
Posted by Rhology at 12:23 PM 1 comment: Links to this post