The special pleading of Sola Ecclesia-ists' claims to unity

A favored argument against Sola Scriptura frequently used by our friends in the Roman Church and the Eastern Orthodox Church is "Just look at Protestantism! It's a mess, of 22,000 25,000 30,000 33,000 58 gazillion denominations!"
What are they saying? Mostly that Sola Scriptura as a rule of faith is insufficient to bring about institutional, organisational unity to the church of Jesus Christ. And of course, Christ would obviously want His church to have institutional, organisational unity! Evidently, setting the 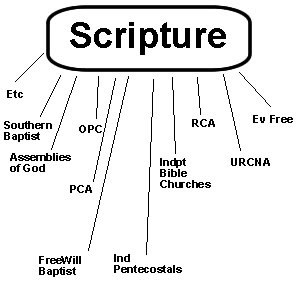 Scripture alone up as the sole infallible final rule of faith for the church doesn't accomplish what it's supposed to. Ergo, Sola Scriptura is false.

I've created this crude and very maladroit drawing to illustrate.


Let's analyse, then, the alternatives of Rome and Eastern Orthodoxy.
Now, we of course like to accuse them of Sola Ecclesia; that is, we contend that their sole infallible final rule of faith is Whatever The Church® Says. But they don't like it when we say that, so let's be conciliatory and lay the contention aside. Their "real" rule of faith is Apostolic Tradition, which includes written and unwritten tradition from the apostles, both in Scripture and in other places such as the lived-out faith of the church, the liturgies, the writings of church fathers down through the years, etc.
Notice that, like the Scripture, this too forms a corpus with limits. The Da Vinci Code is not part of Apostolic Tradition. Neither is the Qur'an, nor is The Audacity of Hope (though, depending on which Roman or EO priest you ask, that last one might be close). We and others have contended many times, rightly, that the limits to the Roman and EO Canons of Scripture are not only poorly defined but actually non-existent. It is also indisputable that one's presupposition of an infallible interpreter (whether she be Rome or EOC) will govern which little-t traditions are actually accepted, promoted if you will, to Big-T Sacred Apostolic Tradition, thus forming the basis for Roman or Orthodox dogma, leaving the little-t traditions to rot by the wayside, relegated to "Well, he was just speaking as a private theologian" or "That was just his opinion" status.
But let's leave all of that aside and grant that there is one big and awe-inspiring God-given Verbum Dei corpus of Scripture and Tradition that is the proper rule of faith for the church of Jesus Christ. 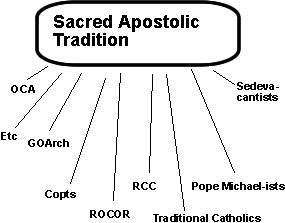 The problem is obvious - Rome, sedevacantists, traditionalist Catholics, Pope Michael-ists, Eastern Orthodox, Coptic Orthodox, and various other churches with incompatible teachings all appeal to this set and limited corpus of Scripture and Tradition. It would appear that the criticism against Sola Scriptura of multiple denominations applies to the Roman and EO rule of faith as well.

The Romanist or Orthodox might object: "But we're not in communion with those schismatics/heterodox/heretics!" Now, what if I were to reply, as a member of a Southern Baptist church, that, have no fear my non-Sola Scripturist friends, my church holds that everyone who's not a member of a Southern Baptist church is a schismatic/heterodox/heretic too? Would that make our Romanist or Orthodox friends feel better?
Or would that make them criticise us even more strongly: "See? You Sola Scripturists can't even hold communion with each other!"? Yep, my money's on that one, too. We're darned if we do and darned if we don't, but somehow if the Romanists or Orthodox don't hold communion with these other churches, that's just fine. Such special pleading is just...special.

So let me break this down as clearly as I can. "The Protestant Church" does not exist. Self-named "Protestant churches" vary so widely in doctrine and authority as to make points of comparison impossible to ascertain. If you want to compare unity and disunity, compare the adherences to the competing rules of faith. Or compare churches, like the Roman Church to the Southern Baptist Convention or the Pope Michael Catholic Church to the Orthodox Presbyterian Church. What do we find, if we do this? How different from each other are the churches that hold to Scripture alone as rule of faith, and how different from each other are the churches that hold to "Sacred Apostolic Tradition" as rule of faith? Answer that and you'll know one reason why we consider all this talk about how Tradition and Magisterium make for superior church unity to be just that - talk.

(Please leave any comments at the cross-post at Beggars All)
Posted by Rhology at 9:10 AM