Preaching at the Norman Abortuary, 29 August 2013

Act 1:1  In the first book, O Theophilus, I have dealt with all that Jesus began to do and teach,
Act 1:2  until the day when he was taken up, after he had given commands through the Holy Spirit to the apostles whom he had chosen.
Act 1:3  He presented himself alive to them after his suffering by many proofs, appearing to them during forty days and speaking about the kingdom of God.
Act 1:4  And while staying with them he ordered them not to depart from Jerusalem, but to wait for the promise of the Father, which, he said, "you heard from me;
Act 1:5  for John baptized with water, but you will be baptized with the Holy Spirit not many days from now."
Act 1:6  So when they had come together, they asked him, "Lord, will you at this time restore the kingdom to Israel?"
Act 1:7  He said to them, "It is not for you to know times or seasons that the Father has fixed by his own authority.
Act 1:8  But you will receive power when the Holy Spirit has come upon you, and you will be my witnesses in Jerusalem and in all Judea and Samaria, and to the end of the earth."

1Co 12:3  Therefore I want you to understand that no one speaking in the Spirit of God ever says "Jesus is accursed!" and no one can say "Jesus is Lord" except in the Holy Spirit. 1Co 12:4  Now there are varieties of gifts, but the same Spirit;
1Co 12:5  and there are varieties of service, but the same Lord;
1Co 12:6  and there are varieties of activities, but it is the same God who empowers them all in everyone.
1Co 12:7  To each is given the manifestation of the Spirit for the common good.
1Co 12:8  For to one is given through the Spirit the utterance of wisdom, and to another the utterance of knowledge according to the same Spirit,
1Co 12:9  to another faith by the same Spirit, to another gifts of healing by the one Spirit,
1Co 12:10  to another the working of miracles, to another prophecy, to another the ability to distinguish between spirits, to another various kinds of tongues, to another the interpretation of tongues.
1Co 12:11  All these are empowered by one and the same Spirit, who apportions to each one individually as he wills.
1Co 12:12  For just as the body is one and has many members, and all the members of the body, though many, are one body, so it is with Christ.
1Co 12:13  For in one Spirit we were all baptized into one body—Jews or Greeks, slaves or free—and all were made to drink of one Spirit.
Posted by Rhology at 10:18 AM No comments: Links to this post

James White off the cuff on seminary

Posted by Rhology at 12:20 PM No comments: Links to this post

Hey, who's that guy next to James White? 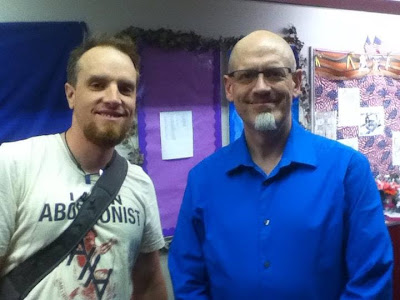 Posted by Rhology at 9:42 AM No comments: Links to this post

1Then Rehoboam went to Shechem, for all Israel had come to Shechem to make him king. 2Now when Jeroboam the son of Nebat heard of it, he was living in Egypt (for he was yet in Egypt, where he had fled from the presence of King Solomon). 3Then they sent and called him, and Jeroboam and all the assembly of Israel came and spoke to Rehoboam, saying, 4“Your father made our yoke hard; now therefore lighten the hard service of your father and his heavy yoke which he put on us, and we will serve you.” 5Then he said to them, “Depart for three days, then return to me.” So the people departed.
6King Rehoboam consulted with the elders who had served his father Solomon while he was still alive, saying, “How do you counsel me to answer this people?” 7Then they spoke to him, saying, “If you will be a servant to this people today, and will serve them and grant them their petition, and speak good words to them, then they will be your servants forever.” 8But he forsook the counsel of the elders which they had given him, and consulted with the young men who grew up with him and served him. 9So he said to them, “What counsel do you give that we may answer this people who have spoken to me, saying, ‘Lighten the yoke which your father put on us’?” 10The young men who grew up with him spoke to him, saying, “Thus you shall say to this people who spoke to you, saying, ‘Your father made our yoke heavy, now you make it lighter for us!’ But you shall speak to them, ‘My little finger is thicker than my father’s loins! 11‘Whereas my father loaded you with a heavy yoke, I will add to your yoke; my father disciplined you with whips, but I will discipline you with scorpions.’”

12Then Jeroboam and all the people came to Rehoboam on the third day as the king had directed, saying, “Return to me on the third day.” 13The king answered the people harshly, for he forsook the advice of the elders which they had given him, 14and he spoke to them according to the advice of the young men, saying, “My father made your yoke heavy, but I will add to your yoke; my father disciplined you with whips, but I will discipline you with scorpions.” 15So the king did not listen to the people; for it was a turn of events from the LORD, that He might establish His word, which the LORD spoke through Ahijah the Shilonite to Jeroboam the son of Nebat.

16When all Israel saw that the king did not listen to them, the people answered the king, saying,
“What portion do we have in David?
We have no inheritance in the son of Jesse;
To your tents, O Israel!
Now look after your own house, David!”
So Israel departed to their tents.

17But as for the sons of Israel who lived in the cities of Judah, Rehoboam reigned over them. 18Then King Rehoboam sent Adoram, who was over the forced labor, and all Israel stoned him to death. And King Rehoboam made haste to mount his chariot to flee to Jerusalem. 19So Israel has been in rebellion against the house of David to this day.

20It came about when all Israel heard that Jeroboam had returned, that they sent and called him to the assembly and made him king over all Israel. None but the tribe of Judah followed the house of David.

21Now when Rehoboam had come to Jerusalem, he assembled all the house of Judah and the tribe of Benjamin, 180,000 chosen men who were warriors, to fight against the house of Israel to restore the kingdom to Rehoboam the son of Solomon. 22But the word of God came to Shemaiah the man of God, saying, 23“Speak to Rehoboam the son of Solomon, king of Judah, and to all the house of Judah and Benjamin and to the rest of the people, saying, 24‘Thus says the LORD, “You must not go up and fight against your relatives the sons of Israel; return every man to his house, for this thing has come from Me.”’” So they listened to the word of the LORD, and returned and went their way according to the word of the LORD.

So, did God choose to break the kingdom into two pieces, or did Rehoboam choose to speak harshly to the people, of his own free choice, and did the people choose Jeroboam as king of their own free choice?
What if the answer to all of those is Yes?
Posted by Rhology at 9:27 AM No comments: Links to this post

Please see here the notes concerning the ongoing hypocrisy of Marcus Pittman, Jon Speed, and the Babies Are Murdered Here group.
Posted by Rhology at 9:22 PM No comments: Links to this post