Russell Moore, Prior, and the Sham of the Pro-Life Movement

*Editorial Note: Pulpit & Pen continues in unrepentant sin and enabling of the ongoing sin of Jordan Hall. While it is my understanding that P&P does not plan to take down the content I contributed, any role I can play in reducing their traffic until they repent, I will. Thus I migrate this article here.

Say it were 1937 in Germany and you had the opportunity to vote in an election that pitted a guy who wants to shove all the Jews in Europe into ovens against a guy who runs on a platform that, if the SS wants to shove Jews into ovens, they’ll at least have to do that on their own dime rather than using taxpayer money. So you vote for that guy because of course you do. Then you shake the dust off your hands – you’ve done your duty for the next four years. Sure hope that guy defunds the SS so at least your money only goes to fund the Nazi war machine that protects the death camps rather than the death camps themselves. Your morals are untainted, your virtue safeguarded.

Let’s call that what it is – limp-wristed cowardice, apathy, and probably Idolatry of the State, which is ironic among people who like to style themselves self-sufficient, oppose Big Government, and say stuff like “No King But Christ”.

Rather than contort the analogy too far, let us abandon it here and talk concrete facts.
It is the epitome of negligent weakness to center one’s opposition to abortion around the defunding of Planned Parenthood, which is merely one provider among many, many others and who, if it should collapse, would merely be replaced by other baby-murderers who learned valuable lessons from how PP was taken down. Why?
Because abortion is sin. It is sin in the highest degree, a direct and unequivocal assault on the image of God in man and the love of neighbor. Yet because of the moral bankruptcy of our culture, those who cry “Defund PP!” are seen as the fringe radicals. It’s time to take the fringe back, as it were. 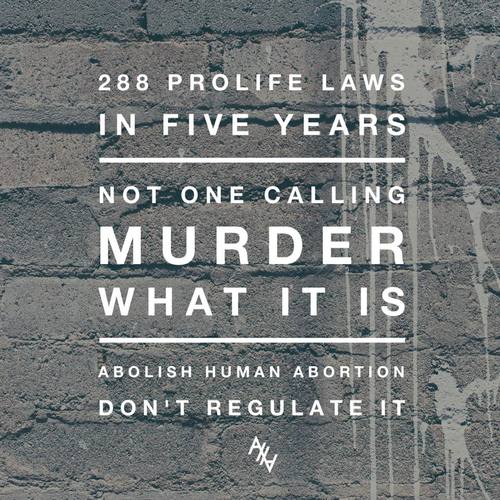 You see, there are “fringe” big shots and politicians who are making a killing off of your donations and political support, while they ignore the actual killing happening right under their noses. Let’s talk about three recent examples.
This week, the newly-formed Evangelicals for Life, an apparent joint venture between Focus on the Family and the ERLC, threw a mutual back-slapping party at a nice expensive hotel in DC. David Platt was in the house instead of discipling people at his church. There was “worship” music instead of mourning and wailing. They got “equipped” and “inspired” to… vote pro-life and that’s about it, if recent history is any indication. It’s a treadmill, going nowhere. But wait, there’s more to it!
Oklahoma Senator James Lankford, who gained notoriety and right-wing electoral gravitas as the longtime Director of what is probably the largest false conversion factory in the southern United States, is known to be a paragon of conservative values. A mainstay at prayer breakfasts and big shot churchianity political events, here is a man with the clout to call for immediate and total abolition of child sacrifice and push for it with real heft to actually inspire real action. Instead, well… that’s not exactly what happened.
James Lankford voted FOR the federal budget that would FULLY FUND Planned Parenthood. And then he got up on stage at the inaugural Evangelicals for Life and received their “Pro-Life Leader Award”.

You can’t make this stuff up, friends. And who’s that in the middle, presenting this wickedly vapid award to this fatally compromised proponent of worldly churchianity? Everyone’s favorite undercover leftist, Russell Moore.
You might say: OK, fine, yes, no well-known conservative Republican Congressmen treat murder like what it is – murder. OK, fine, yes, numerous of them voted in favor of funding the largest and most prolific killer of human beings in the USA. But hey, we’re marching for life! Which brings us to Karen Swallow Prior’s celebratory tweet that merely calls attention to another fatal flaw in the Pro-Life Movement:

Evangelicals are joining Catholics in the March for Life this year: https://t.co/fIIV8osrHL
— Karen Swallow Prior (@LoveLifeLitGod) January 22, 2016


This is nothing new, but it’s always nice when someone like Prior confirms her convictions in public. Think back with me – abortion is sin. Right? What’s the answer to sin? More laws? Electing the right President? Electing the right Congress (you’re kidding, right; did you read the last four paragraphs)? Let me tell you what God thinks is the answer to sin: The Gospel of Jesus Christ. Does Rome have the Gospel? No, most definitely not. Rome opposes the Gospel in many ways, some obvious and some very deviously subtle. But evangelicals, who adhere to the exclusive claims of the Gospel and Sola Fide and stuff, are joining with those who hate the Gospel to fight something that can only be conquered by the Gospel?

I don’t know, but maybe Russell Moore does.


Backstage at the March for Life with Cardinal Dolan of New York and the Little Sisters of the Poor.#whywemarch pic.twitter.com/tjhU2H0x4C — Russell Moore (@drmoore) January 22, 2016


Maybe it’ll be OK, though, because I got a weekly bulletin from LifeNews.com titled Enough is enough! Surely these guys know what’s up. I mean, enough is certainly enough.

Yeah, a pro-life president. Someone like Lankford! Er, wait, someone like another career politician who has never treated murder like murder his whole life. Who is palatable enough to the current Republican establishment that he’s gotten this far in the campaign. That’ll fix everything!


If you are sick and tired of 43 years of abortion and want to do something about it, make a donation to LifeNews TODAY…

That’s it! Give money to someone who sends out emails and runs a website so he can love your preborn neighbor for you. That’ll show Planned Parenthood!
Your neighbors are being torn apart or poisoned to death every single day. These jokers just do not give any indication they care about that. But we are all responsible to love those neighbors as ourselves.
Get to work. This is on you. Abolish Human Abortion.
Posted by Rhology at 1:44 PM No comments: Links to this post

At the 2nd so-called Black Mass in OKC, street preachers who tend toward the Pelagian and the abusive (those who I've been told sometimes call themselves the "Pervert Patrol", though that information might be flawed) were present from Tulsa. Brother Toby and I engaged them and asked them to speak with persuasiveness and grace with people, beseeching and pleading with them rather than berating them and calling names. They did not respond well.

I later encountered them outside the Joel Osteen "Night of Hope" event in Tulsa in April 2015. Abolitionists were agitating and proclaiming the Law and Gospel of God there, and these other preachers were also present, again repeating their abusive and mean-spirited behavior that we had previously observed in OKC. I took the opportunity to rebuke them publicly to their face in an interaction behind which I stand 100% as justified and indeed necessary and helpful, given who these men are and how they act.

A few months later I believe I commented on one of their videos either on that channel or on compatriot Chris Hale's channel (now defunct), and they responded, leading to a conversation of some length, (probably on this video, which has been taken down for some reason) during which the interlocutor (Peter Schultz) challenged me to a face-to-face debate, again including childish abusive language like "kiddo" and "we'll give you 30 minutes on Sunday to phone in and teach the church whatever you want to. Game? Doubt it, big boy" and "Had a real good laugh over the hypocrisy you displayed as you yelled 'sinner, sinner, sinner' in that whiney voice of yours".

I of course was more than happy to engage in such a debate. It turns out they didn't mean I'd debate one of them, though. I was put in touch via email with one Randy Hartinger, and figured he was a resident of Tulsa, so we made our plans, exchanged some emails about each other's positions for preparation sake, and then set the time and date.

I arrived at Schultz's house on 04Oct15, to find that I was to debate Hartinger, yes, but in fact via Skype, since he lives in Virginia and "acts as one church" with Schultz's house church via video conferencing. The video had been going for at least three hours when I arrived, so I guess those two churches "act as one" every Sunday or something via teleconference. Oookkaaaayyyy.

At any rate, we proceeded with the debate, and here it is:


To clarify a few things about Schultz's slanted "introduction":
--During the phone call mentioned at the 2:30 minute mark, I'm not at all confident that "he wanted to drop the call like a hot lava rock" is accurate. I was looking for teammates in street evangelism, and when I realised who he was and what he believes and how he acts, I understood it would be bad to continue wasting his time and mine. He makes it sound like I abruptly hung up. Typical.
--At the 3:10 mark, during our Facebook PM conversation, it's true that he said he couldn't meet on a Sunday and I was fine with that. I never offered again because at that point it was becoming clear that he was more than just some lost soul that could possibly be reached with a private conversation. Rather, he is a false teacher and a wolf to be opposed and exposed publicly.
--3:50 mark - I was at JoelO to preach the Gospel. The debate mentioned was part of the reason I was in Tulsa that weekend, but far from the only reason.

Also, for some reason around the 20:30 mark, I said that I did not attend the debate mentioned. I did actually attend most of it, but there was another presentation the night before that I did not attend, and due to my nervousness I experienced a brain fart and confused the two.

During the debate I certainly could have improved here and there but overall I believe it was a good use of time, for the record. Since I definitely do think that men like these give Gospel preachers a bad name, it is good that I can point to my interactions with men like them to show any honest inquirer that we are not on the same team.
Posted by Rhology at 2:01 PM 14 comments: Links to this post

Bonus points if you catch where any of the following words escape my lips:
--predestination
--election
--Calvin
--irresistible
--free will
Posted by Rhology at 10:59 AM No comments: Links to this post